Dolphins and Whales of the Great Barrier Reef

The warm waters of the Great Barrier Reef hold an abundance of food and are the perfect feeding grounds for marine mammals including large numbers of dolphins and whales looking both for sheltered waters place to feed and care for their young. You can expect to find about 30 different species of whales and dolphins in the Great Barrier Reef’s borders, with Humpback and Dwarf Minke whales along with Bottlenose dolphins being among the most common.

Probably the most iconic of all Australian whales is the Humpback Whale which is due to not their high numbers that visit on their annual migration along the Australian coast but also for Their propensity to perform spectacular breaching and tail-slapping. This has made whale watching tour a favourite past time for Australians and tourists and has raised awareness about the need for protection and conservation. 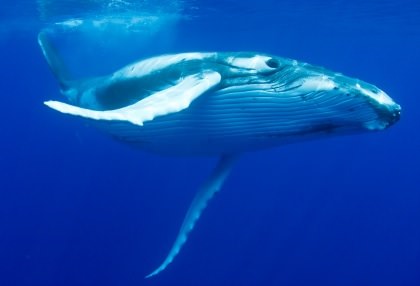 The Humpbacks, whose name is derived from the “humping” motion they make when diving back down below the surface, perform an annual migration between the waters of the Antarctic where they feed then head up north to the Great Barrier Reef’s more tropical waters to give birth and raise their children.

Humpbacks grow from 12 – 16 metres in size upon reaching adulthood and can usually be spotted on the reef in locations as far north as Cairns and the Whitsundays. Humpbacks spend their time in the Great Barrier Reef mostly for relaxation and play – having stocked up on a steady diet of krill and other forms of fish while in the Antarctic – letting their new calves build up body fat for insulation so they can survive the return journey back to the Antarctic’s icy seas.

Whales were frequently hunted in the 1940s-1960s which significantly depleted their population numbers but in recent years their population has begun to climb steadily once again from numbers as low as 200 during the peak era of whaling to an estimate of 26,000 in 2016. Multiple environmental groups have taken strong stands against whaling and for conservation of not only the Humpback but also many other groups, and it looks likely that their numbers will continue to increase in the coming years. 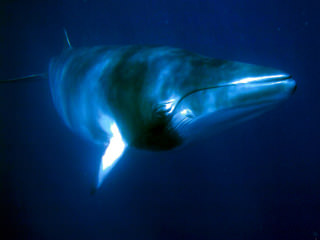 In the whale world, being called a “dwarf” is definitely a relative term – the Dwarf Minke Whales that can be found in the waters of the Great Barrier Reef still average just under eight metres in length, with a weight of up to five tons.

Dwarf Minke whales, much like the Humpbacks, are a fairly social creature and will often approach boats and other marine vessels out of curiosity which makes spotting them – despite their relatively few numbers – quite an easy task. Dwarf Minkes are distinct from their larger cousins not only due to their slightly smaller size but also due to different bodily markings which are clearly visible. Common differences in colourations that can be found on the Dwarf Minke whale include white shoulder and flipper bases, grey tips on their flippers, and large dark patches which line their throats. Around 200 individual Dwarf Minke whales make their way to the Great Barrier Reef each season, with their distinctive markings making it quite easy to recognise individual members of the whale pod.

As with the Humpbacks, Dwarf Minkes were also once targets of a thriving whaling industry; this has likewise been curtailed since regulations were put in place. Natural predators may also play a small factor as due to their slightly smaller size than the average whale, they become a target for such ocean predators as Tiger or Great White Sharks or Killer Whales. Small calves are also particularly vulnerable to attack, which can make the parents especially protective of their young. 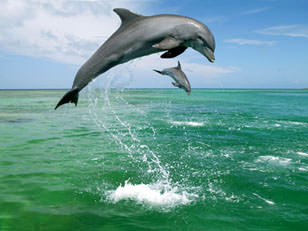 With an uncannily “friendly” looking face and an inherently playful nature, Bottlenose dolphins are always favourites due to their ease and frequency of interaction with humans.

Wide in number, Bottlenose dolphins can be found in cold-temperate to tropical seas all over the world, and are extremely intelligent creatures in general. As powerful swimmers, Bottlenose dolphins show an innate ability to escape from predators due to a combination of smarts and a top swimming speed of around 37 kilometres per hour. Due to their social nature, Bottlenose dolphins tend to travel in large groups and can be frequently seen accompanying tour boats that head out to the Great Barrier Reef, surfacing and cackling or playing in the wake of the ship and occasionally leaping out of the water in spectacular fashion. Bottlenose dolphins grow to a maximum size of 4 metres in length, and have a dark grey complexion near their top fin that then becomes lighter towards their underbellies.

The diet of the Bottlenose Dolphin consists of a variety of smaller fish and marine life including Squid, Crab, prawns and other smaller creatures and are renowned for their teamwork in rounding up prey much like herding farm animals. In order to locate their food, the Dolphins use a form of “natural sonar” based on echoes and use it to determine both the location and distance of their potential target – yet another reflection of their intelligence.

In fact, due to their smarts, dolphins have shown an easy ability to respond to training from humans and as a result are a fixture at many popular marine-based theme parks throughout the world where they can be seen performing spectacular stunts.